Every four years, the financial media celebrates the time-honored tradition of attempting to use presidential elections to predict, explain, and otherwise analyze the performance of the markets. We found these examples of actual news headlines with a quick search online, but there are countless others:

“How to Trade the Political Headlines”
“What the Elections Mean for the Markets”
“Here’s Where Investors are Moving Their Money Ahead of the 2020 Presidential Election”
“Another Stock Market Worry: The Year Leading Up to a Presidential Election Tends to be Below Average”

These stories are appealing to humans because of their sense of certainty, but unfortunately that certainty is false. What if, instead, we start with a little dose of humility and state what we don’t know:

While we can’t predict the future, we can let the past inform and give us perspective on what might happen. Based on that data, and our experience, we know the following: 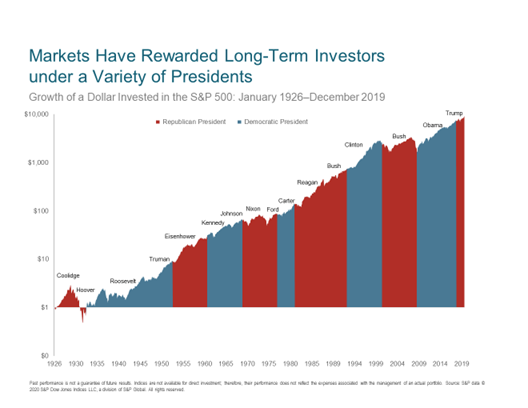 These headlines and even that which we do know fail to address the larger issue: You are not the market. Your investments are a key piece of your financial plan, but a well-designed plan doesn’t fail when those investments fluctuate in value during elections. Moreover, your plan’s success certainly should not depend upon anyone’s ability to predict those fluctuations.

However, the whole point of having a financial plan built with your risk tolerance in mind, and with appropriate buffers in place, is to allow you to withstand the rough financial seas that can accompany increased volatility. If that’s not enough solace, it might be time to revisit your plan as a reminder, or to make sure that adjustments are not necessary. (Note: we actually have a wonderful blog post here – as well as our multi-part mini-series on our podcast  – that talk about steps folks can take during market declines.)

To be clear, we don’t expect folks to react indifferently to the political and ideological roller coaster that is an election year. We simply caution letting those viewpoints infiltrate your investment decision-making process. Time has shown this to be a losing strategy. Markets have proven, over time, to be driven by the innovation and growth of quality companies in the US and abroad, and that progress has continued to drive markets upward over the long term, regardless of the outcomes of our presidential elections.

To end with a clichéd metaphor, investing in the market is like driving a car. Sometimes around election time you run into unexpected traffic (market volatility). Changing lanes (making reactive changes to your investments) usually doesn’t get you there any faster, and leaving a space between you and the car in front of you can make the ride a little smoother (having a financial plan with appropriate buffers). Whatever you do, don’t forget to remember that riding in the car isn’t an end in and of itself, but a means to get to your destination (your long-term goals). Finally, avoid looking at your phone while driving at all costs (watching the financial media), because those distractions can increase the odds of a fender-bender!